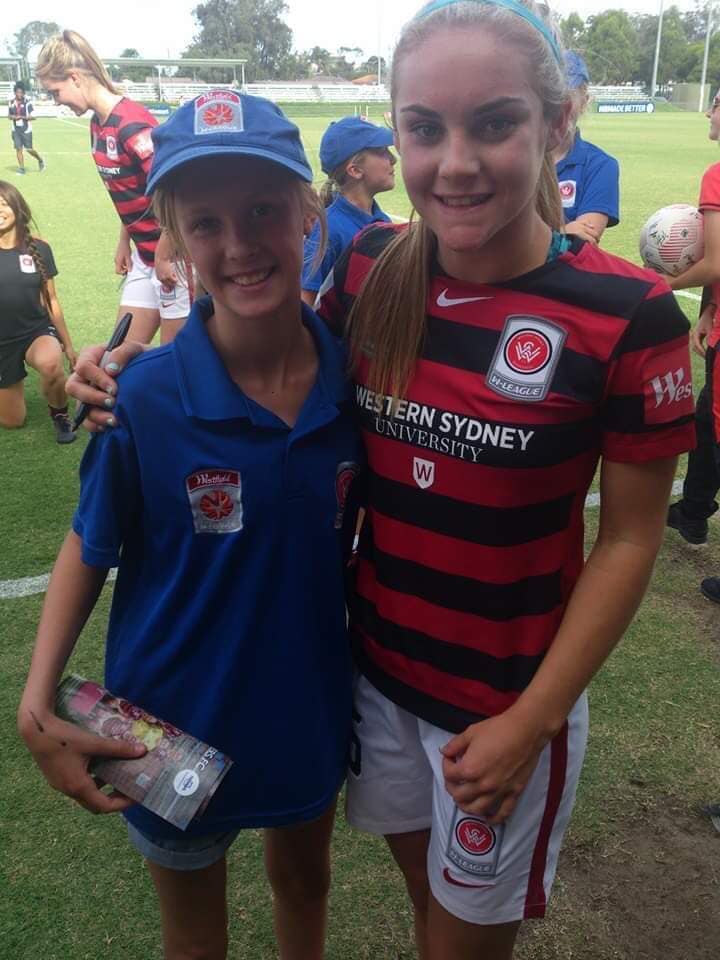 It’s not every day a 16-year-old gets the chance to fulfil her dream, but young Marconi defender and Western Sydney Wanderers’ ball-girl Ella Sievwright is well on the way.

Ella is one of 35 young ladies who are part of the inaugural ‘Future Wander Women Program’. The 20 week program is free and is designed to unearth the rich footballing talent that exists in western Sydney.

Over 200 girls tried out for the program, with 35 success triallists beginning the journey last month that may one day end up in the Wanderers’ W-League squad.

Ella’s Wanderers’ journey started out six years ago, when she began volunteering for the Red & Black with her father Richard. The Sievwright’s are loyal Western Sydney fans, and can be seen at each W-League and A-League game every weekend.

“Season 2015/2016 was when I first started my role as a ball girl,” explains Ella. “The opportunity to sit on the side lines and have a front row seat to each home game was surreal.

“This experience has led to me meeting and getting to know past and current Wanderers’ players and being able to call myself a WSW Volunteer. I have also been a flag bearer and ball kid for our A-League team as well as also being the Wanderers’ mascot ‘Sunny’.”

Ella first started playing football at the age of five in western Sydney for Rouse Hill Rams. She has developed her skills across the western Sydney region, plying her trade at a number of high profile clubs, before landing at powerhouse Marconi.

“I first started playing soccer in 2010, I played for my local club Rouse Hill Rams for four years, then moved to Hills Brumbies, playing with the boys for another two years.

“In 2017 I moved to Mount Druitt Rangers for a year and then to Inter Lions. For the past three years, I have been playing at Marconi Stallions in their NPLW program. I am currently playing under 17s and Reserve Grade each week.”

Marconi has a rich history of producing world class footballers. In Ella, they have a player that is not only willing to do the hard yards to get there, but one that is committed to taking the next step in her footballing adventure.

Ella admits working with Linda and some current Wanderers’ W-League stars has been an exciting part of the set-up.

“Honestly there are so many things in this program that are hard not to like,” she says. “The coaching staff are a major part of this, both Linda Khamis and Libby Copus-Brown have so much experience, and the knowledge they are able to give us which we are able to incorporate into our game helps us to improve the way we see and play the game.

“Most importantly I loved meeting the other girls. I am so lucky and thankful to have an opportunity to meet such wonderful people.”

While she has a long way to go to achieve her potential and her dream, Ella doesn’t have to look very far for inspiration.

One of her favourite players is recently capped Matilda, and Wanderers’ star defender Courtney Nevin.

“She is my inspiration as a player, the way she is able to attack and defend from her position, her fitness and skill levels are remarkable.

“Watching her play for Wanderers and now the Matildas at such a young age shows that it is possible for me to have the opportunity to work for a spot in the Wanderers’ W-league side.

Ella’s story is sure to be an inspiration to any young budding footballer out there. With the W-League only getting bigger, and the Women’s World Cup coming to Australia and New Zealand in 2023, the future of women’s football down under is in good hands.