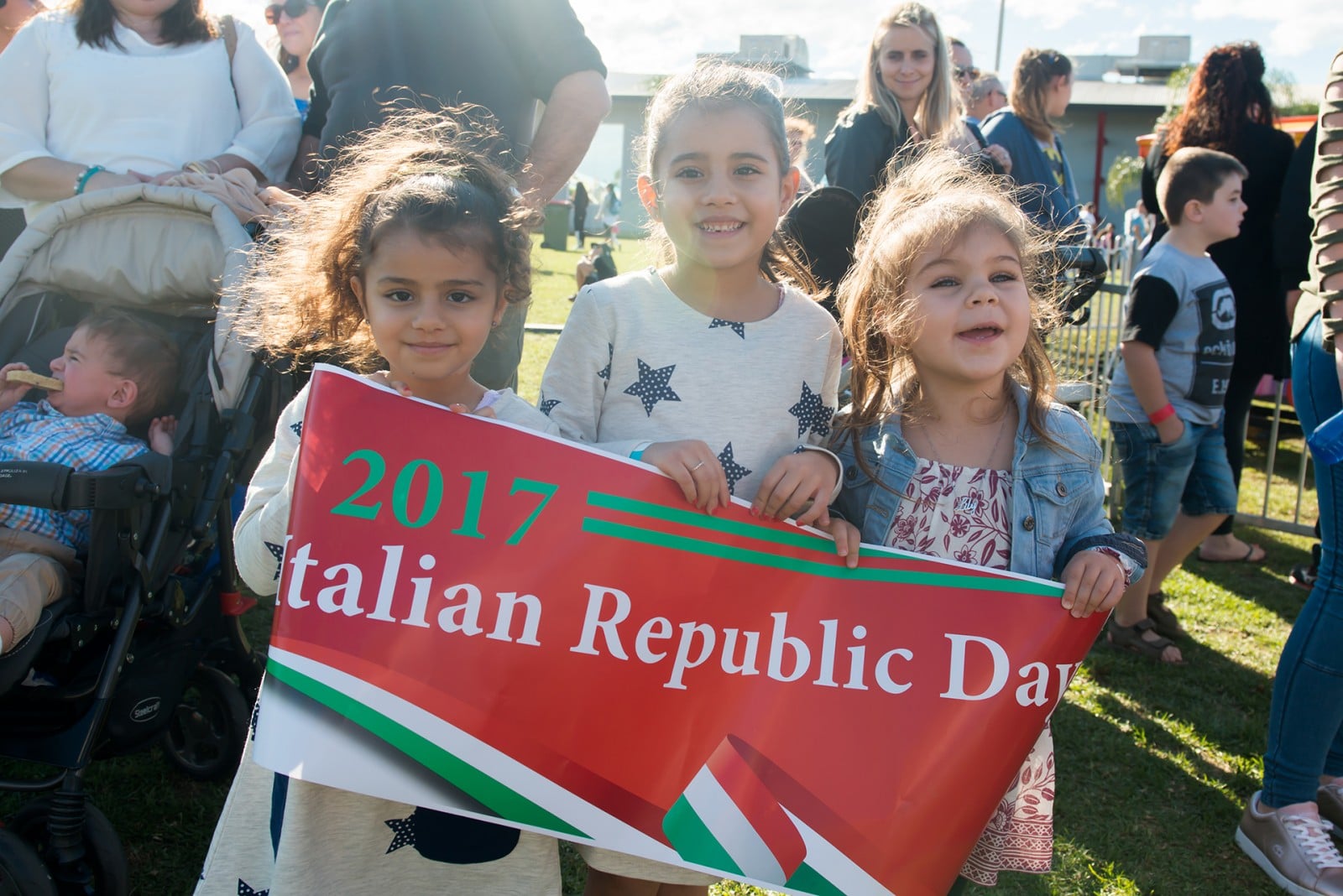 Under clear blue skies, an estimated crowd of close to 28,000 people flocked to Club Marconi on Sunday 28 May to celebrate Italian Republic Day in spectacular fashion.
They were joined by a long list of dignitaries including Mr Craig Kelly MP, Federal Minister for Hughes and official representative for the Prime Minister of Australia; The Hon Ray Williams MP, Minister for Multiculturalism and Minister for Disability Services who officially represented the Premier of NSW; Mr Chris Hayes MP, Member for Fowler and official representative of the Leader of the Opposition; Mr Frank Carbone, Mayor of the City of Fairfield; My Guy Zangari MP, State Member for Fairfield and Shadow Minister for Justice and Police, Corrections and Emergency Services; The Hon Senator Dr Francesco Giacobbe OAM, PhD Senator for the Italian Republic and Mr Arturo Arcano, Consul General for Italy in NSW, along with many others.

The premier event on Club Marconi’s calendar, Italian Republic Day or Festa Della Repubblica grows in popularity year on year and is one of the biggest Italian festivals in the country.

Members, Italians, Australians of Italian decent and friends and visitors from across Sydney come to feast on pizza, roasted pork, panini’s, cannoli, torrone, crostoli, zeppole, gelato and chestnuts, all washed down with copious amounts of wine and coffee. They come to share and celebrate the culture, traditions and pride that makes this community so strong.

It takes months & months of painstaking planning, preparation and resources to pull this massive family event together which includes an Italian mass complete with the Marconi Choir; over 100 food and specialty stalls; carnival rides, games and activities; non-stop entertainment; cooking demonstrations; classic and contemporary automobile and motorcycle displays and a massive International Foti fireworks spectacular to close the day.

Underlying the celebrations of all things Italian was a message of inclusion and cultural diversity. Club Marconi President Vince Foti said that while the Club promoted and imparted the values of their rich Italian heritage, the Club also recognised, embraced and welcomed other cultures that were part of their wider community. He said, “In these current times of turmoil, it is the ideals of unity that must be nurtured and the joy of solidarity and harmony across our community and nation that should be celebrated.”

The Hon. Ray Williams MP, Minister for Multiculturalism and Disability Services said that whilst we are all proud to celebrate cultural diversity, we should never forget the significant contributions that Italians have made to this country and the incredible legacy they have left all of us. Whilst Mr Guy Zangari MP, State Member of Fairfield said it was a proud day for all people of Italian heritage and the turnout of dignitaries at the Festa showed the level of respect for the Italian community at all levels of government.

A highlight of the day were two special awards presented by Mr Arturo Arcano, Consul General for Italy in NSW. The awards are from the Italian Government and are presented in recognition to members of the Italian community abroad for their social and cultural contributions and initiatives. Mr Salvatore Foti was presented with the Ordine della stella d’Italia and Mr Andrea Carnuccio, a long serving Club Marconi and SWIAA Board Member received the L’Ordine al merito della Repubblica.

Salvatore Foti, brother of Club President Vince Foti, said that he accepted the award with a sense of pride and humility. He also said that he shared the award with his father – an artist, a gentleman and an innovator – who instilled in him how anyone can realise their dream. He also paid tribute to his brother Vince who he said had a heart of gold and an artistic and poetic mind. He also said his father taught him to honour and respect Australia, but to never forget that he was “made in Italy”.

The Hon Senator Dr Francesco Giacobbe summed up the day when he said that Club Marconi was the heart & soul of the Italian community. He said Italians made an enormous contribution to the success of this wonderful country when they first migrated here in large numbers after the war but it is their children and their children’s children who are their greatest contribution as they continue to integrate and innovate but not forget their Italian heritage.